Prior to going to Galway everyone I met kept saying  how much they loved Galway. I have had a few instances lately where people rave about a location then I go and I am not overly impressed. I was worried about what I would think but on immediate arrival I was in love.

The city has a great feel. It is electric with activity at all hours of the night. Street performers can be found on every corner. Not just any kind of performers, real talent. I stood amazed night after night watching different people sing and play instruments. If you are looking for a lively city that easily accessible by foot Galway is a must.

Here are the reasons I think you should drop everything and go to Galway. 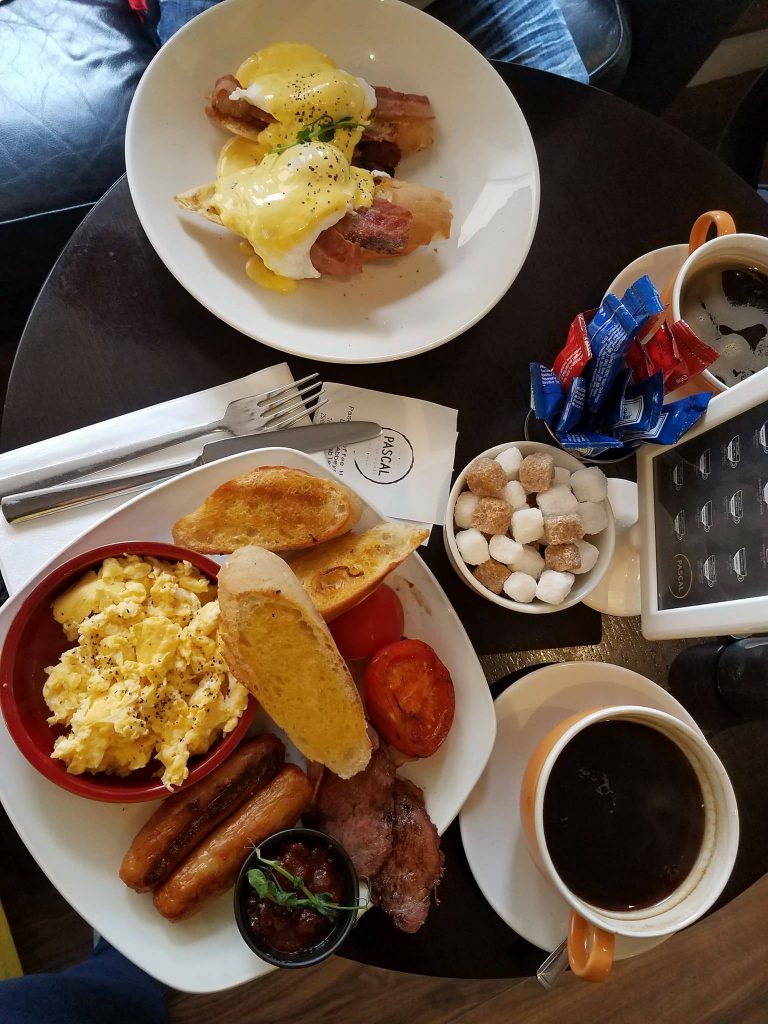 Ireland is not known for its food scene. Which is a shame because after spending 3 weeks there I realized how much of a culinary experience it has to offer. I get it. For a long time it was a poor country that did not have time to focus on being creative it needed to focus on just being fed. The first time I went I ate mostly pub food.

Lucky for me I was in Galway in with a chef. I ate at some pretty interesting places. Of course I ate pub food but I also dined in some of Galway’s best restaurants with young chef’s who created interesting menus.

Notably Ard Bia at Nimmo’s. I had a pumpkin and pearl barely risotto that dreams are made of. It is located directly on the water in a tiny historical house. The lighting is low and the food quality is high. 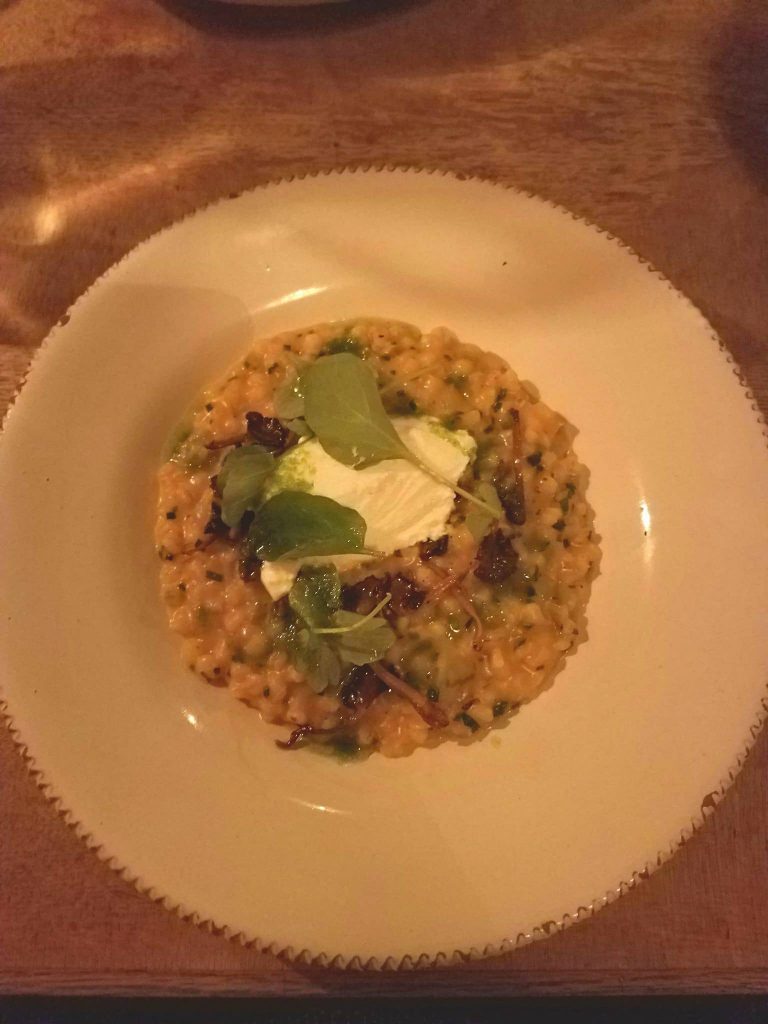 Kai was actually recommended to us by the waiter at Ard Bia. The couple who owns Kai used to work for them before they branched out on their own and they have a friendly relationship. Kai is also a small space in a long street of store fronts. It was also my favorite restaurant during my time in Galway possibly in Ireland. Mostly because I had the best dessert of my life there. It was a chocolate cookie whiskey ice cream sandwich with homemade fudge on it. For dinner I had halloumi steak over fresh vegetables. Which for those of you that don’t know is a kind of cheese. It was such an interesting dish. But we all know how I feel about ice cream.

The next time some says that Ireland doesn’t have a variety of food choices don’t listen to them.

WHERE YOU SHOULD STAY!

I decided to stay at Barnacle’s Hostel because it was highly rated as a fun, well located hostel. I didn’t realize how well located. It is in the middle of the main pedestrian street among all the bars, restaurants and street performers you could ever want. I had a street facing room so it was never quiet but I didn’t come to Galway to sleep.

It was great going out at night and the hostel being in the middle of all the action as well as never being too far from anything you need. My room was spacious and it had a en suite bathroom which is great. I hate having to walk down the hall to go to the bathroom in the middle of the night.

My room was filled with local college students as apparently there is a housing crisis in Galway. It is such a popular place to live now that there isn’t enough space to hold everyone. 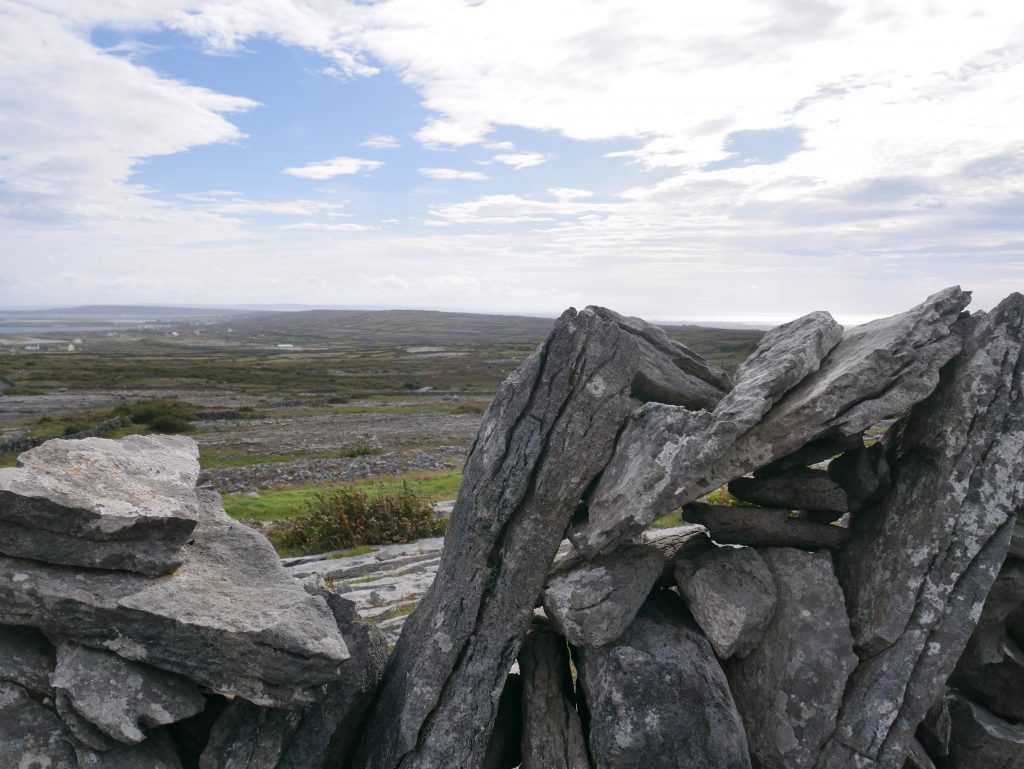 THE PERFECT HOME BASE TO EXPLORE.

These are 3 islands located in Galway Bay. They are known for their ancient sites specifically, Dun Aohngasa on Inishmore ( the largest of the islands), which is a old fort. It is a 45 minutes bus ride and then a 30 minute ferry ride to Inishmore. You can stay the night or take a day trip. I rented a bike to explore the island which proved to be harder than I thought. It looked mostly flat but not all the terrain was easy to bike over. 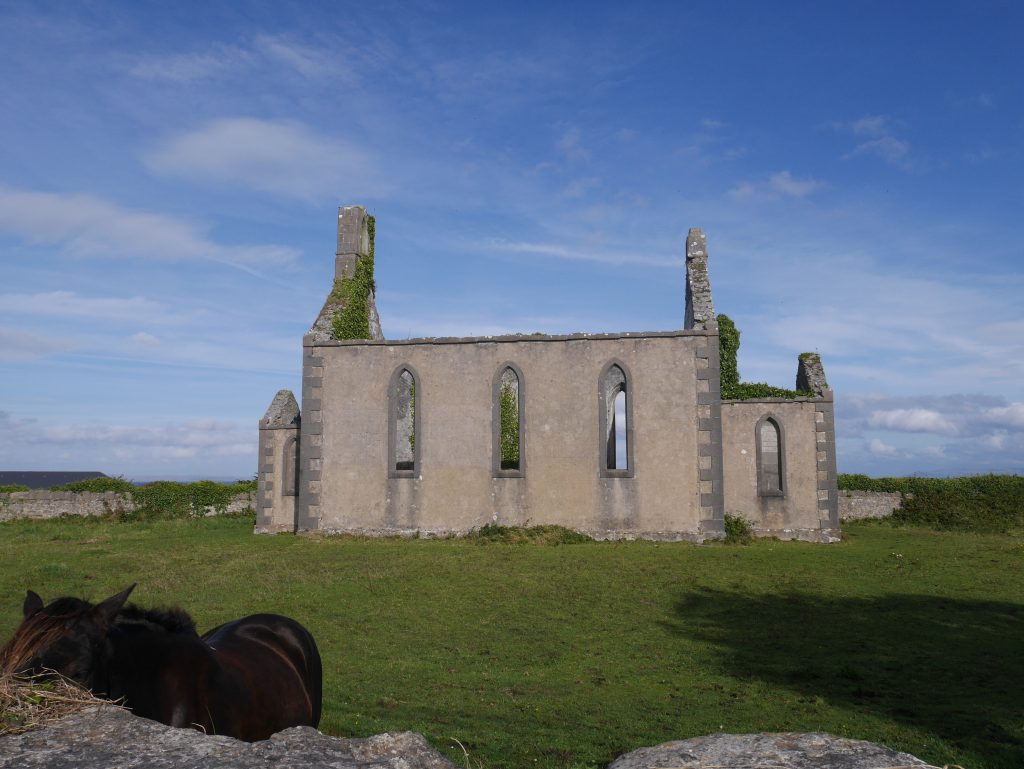 There is a seal colony but I didn’t see any seals. I could hear them but not see them. It didn’t matter because the weather was clear and perfect which almost never happens in Ireland. The sights were beautiful. I climbed to the top of the fort and nearly got blown away trying to take the perfect picture.

Check out info on the Islands here. 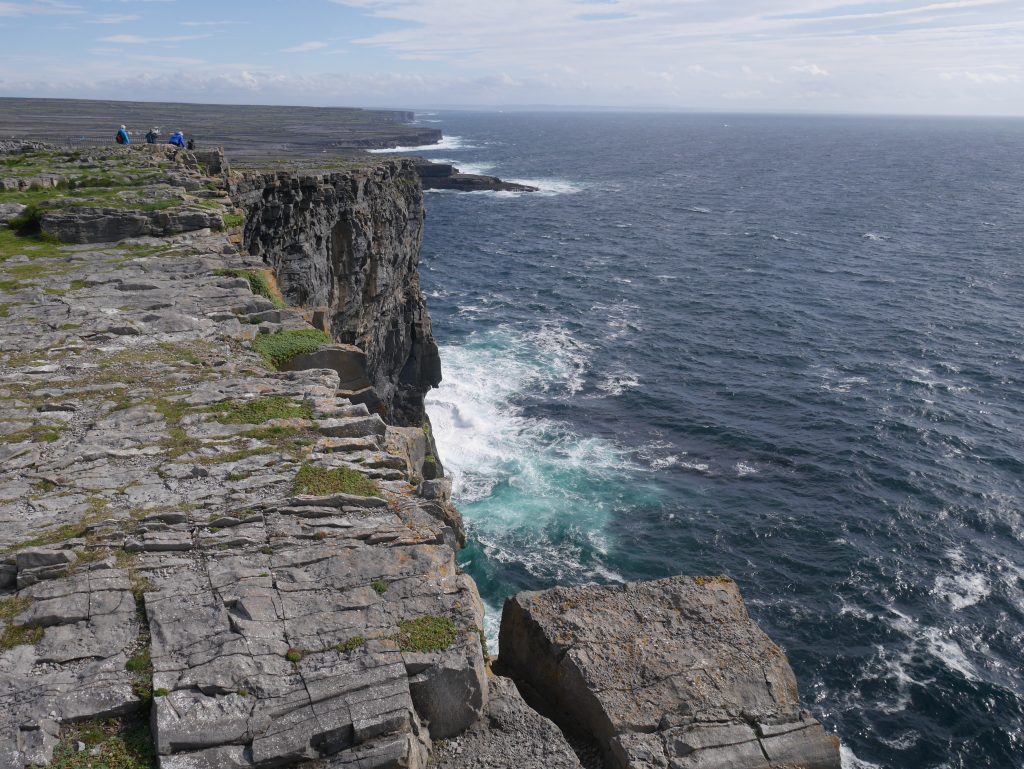 It is easy to book a day trip heading thru Connemara and going to both Kylemore Abbey and Cong Village. I rented a car. I thought it would be an easier way to see the countryside and I had a friend with me. Price wise it is cheaper to just join a tour but it gives you a lot less freedom. 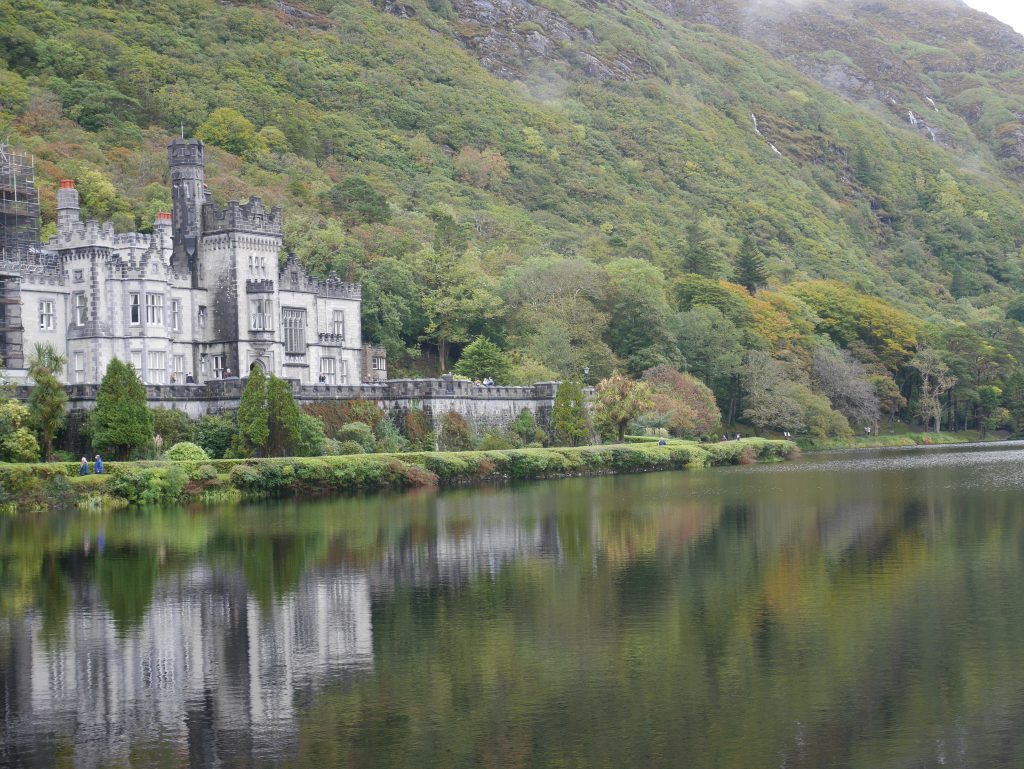 Kylemore Abbey was built by Mitchell Henry for his wife Margaret. However she barely lived to enjoy it. Dying tragically while on vacation in Egypt just a few years after its completion. After that a Duke and Duchess bought it but eventually it ended up with Benedictine nuns who then lived there and took care of the property for nearly a hundred years. They ran it as a school for girls until a few years ago. 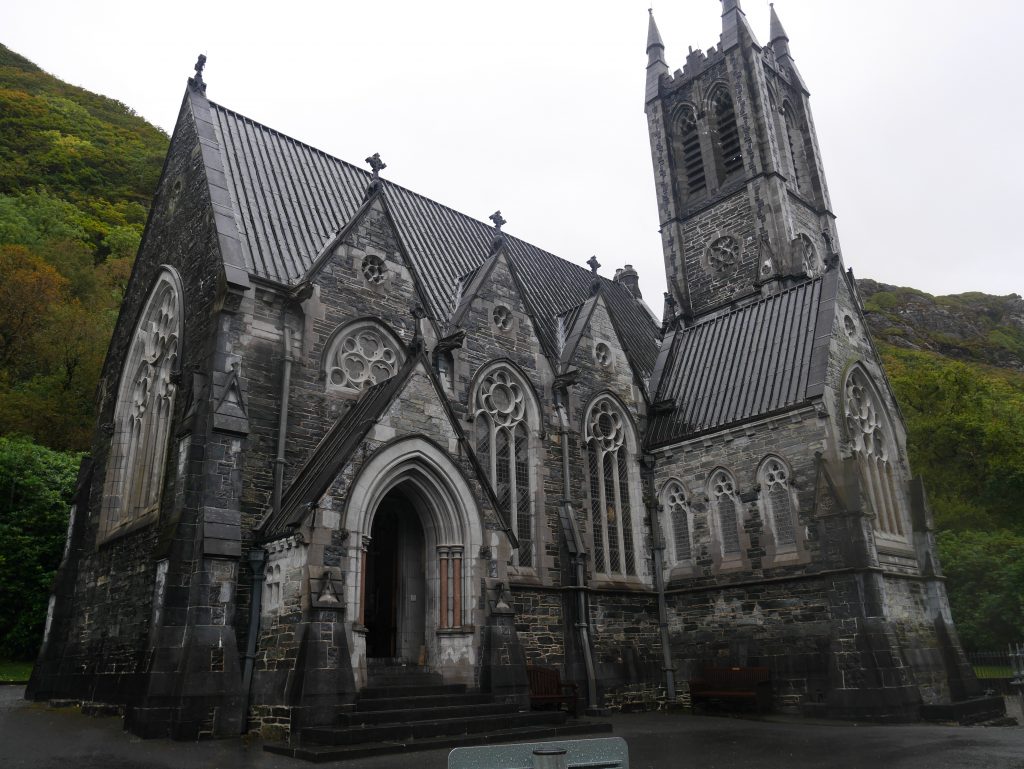 It has a beautiful walled garden as well. It was raining quite heavily the day we went and I couldn’t enjoy the garden as much as I could have. The property is beautiful and it is easy to spend half a day or more wandering the paths and hiking trails.

We nearly did not stop in Cong and it would have been such a shame. It is a very beautiful small village known for the movie ” The Quiet Man” that was filmed decades ago. It has the ruins of abbey as well as hiking trails to take thru the woods. We got there late in the day and avoided any tour groups which made it very serene. 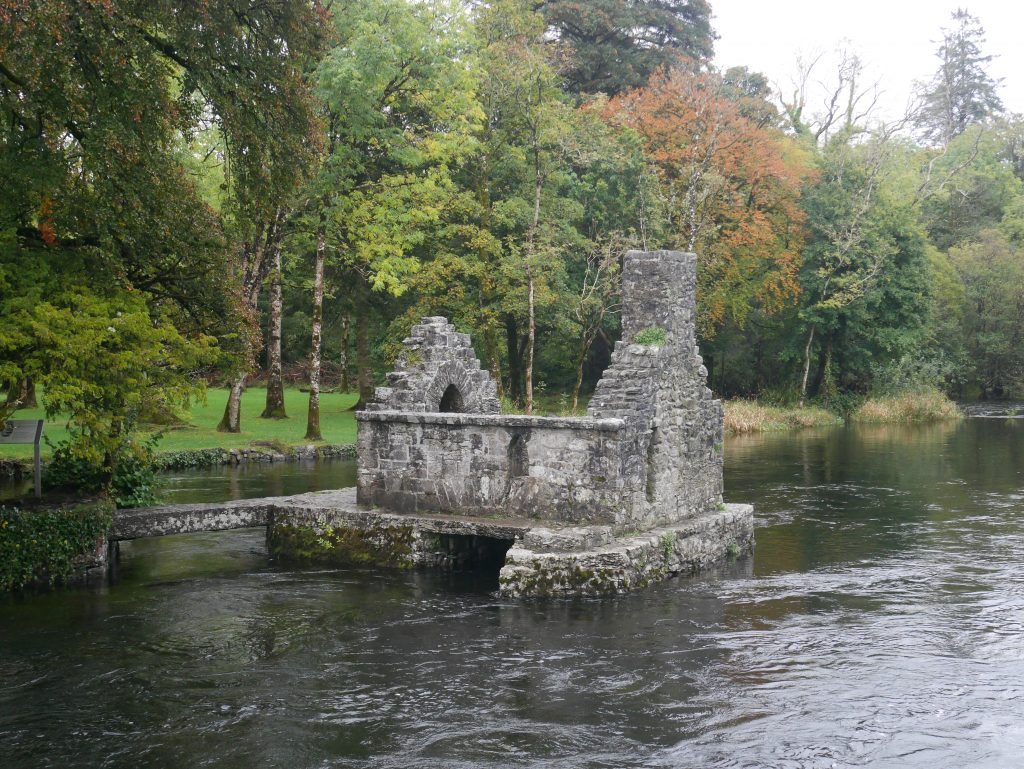 One of the most identifiable landmarks in Ireland, The Cliffs of More are located about a 2 hour drive from Galway. Since we rented a car for 2 days it was easy to get there and make some interesting stops along the way. We stopped in Doolin along the way for lunch. It is the closest town to the cliffs and there is a path that you can walk to the cliffs. Unfortunately it was raining so hard that day we did not walk it. We instead had lunch at a pub. I am sure at one time this was a charming authentic Irish town but now it is just a stop on the tourist track. 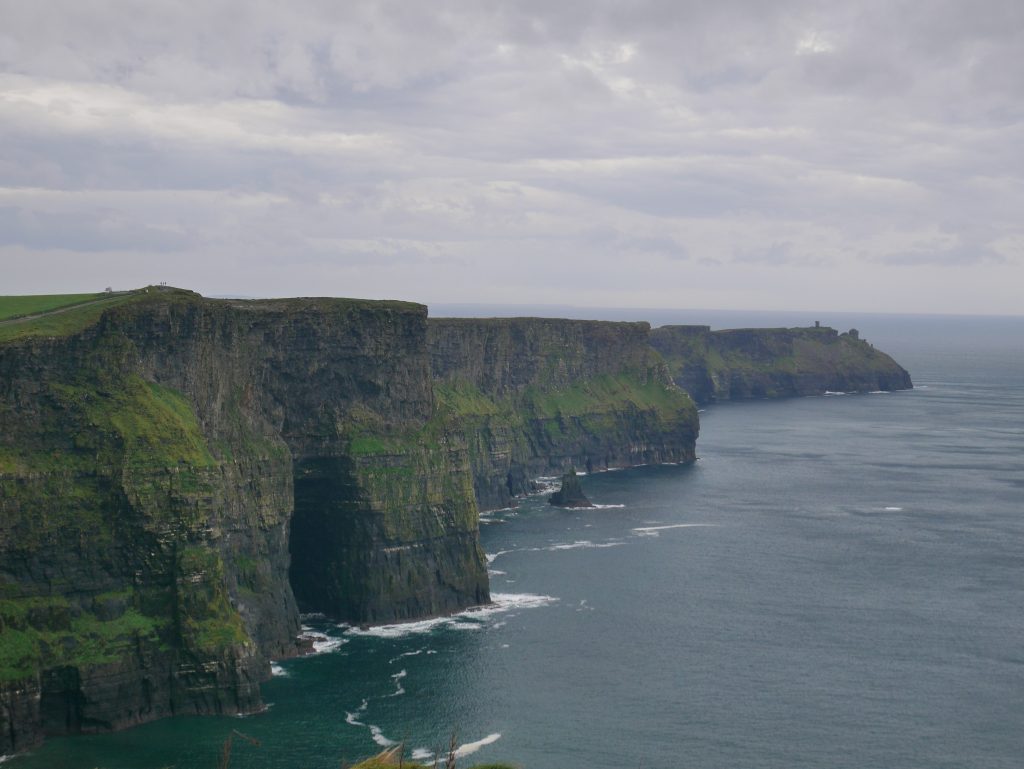 The cliffs themselves are breathtaking. It rained all day with little reprieve as well as strong winds. The pathways were flooded and muddy. This is standard Ireland. I was lucky that I had such a clear day at the Aran Islands. No matter how hard it rains or how windy it is, it is still worth it. Don’t get discouraged if the weather is not what you want it to be. 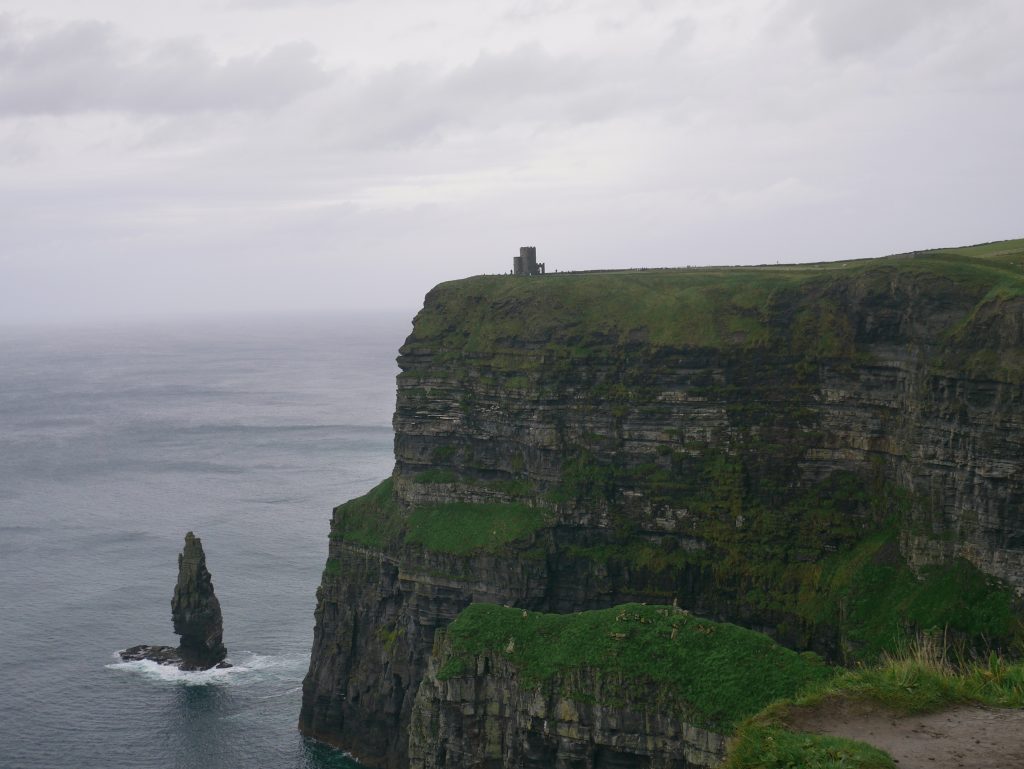 That’s right, go already! It is the place to be in Ireland. It has a great food scene, awesome street performers and pubs to visit and to top it off right in the heart of so many great day trips.