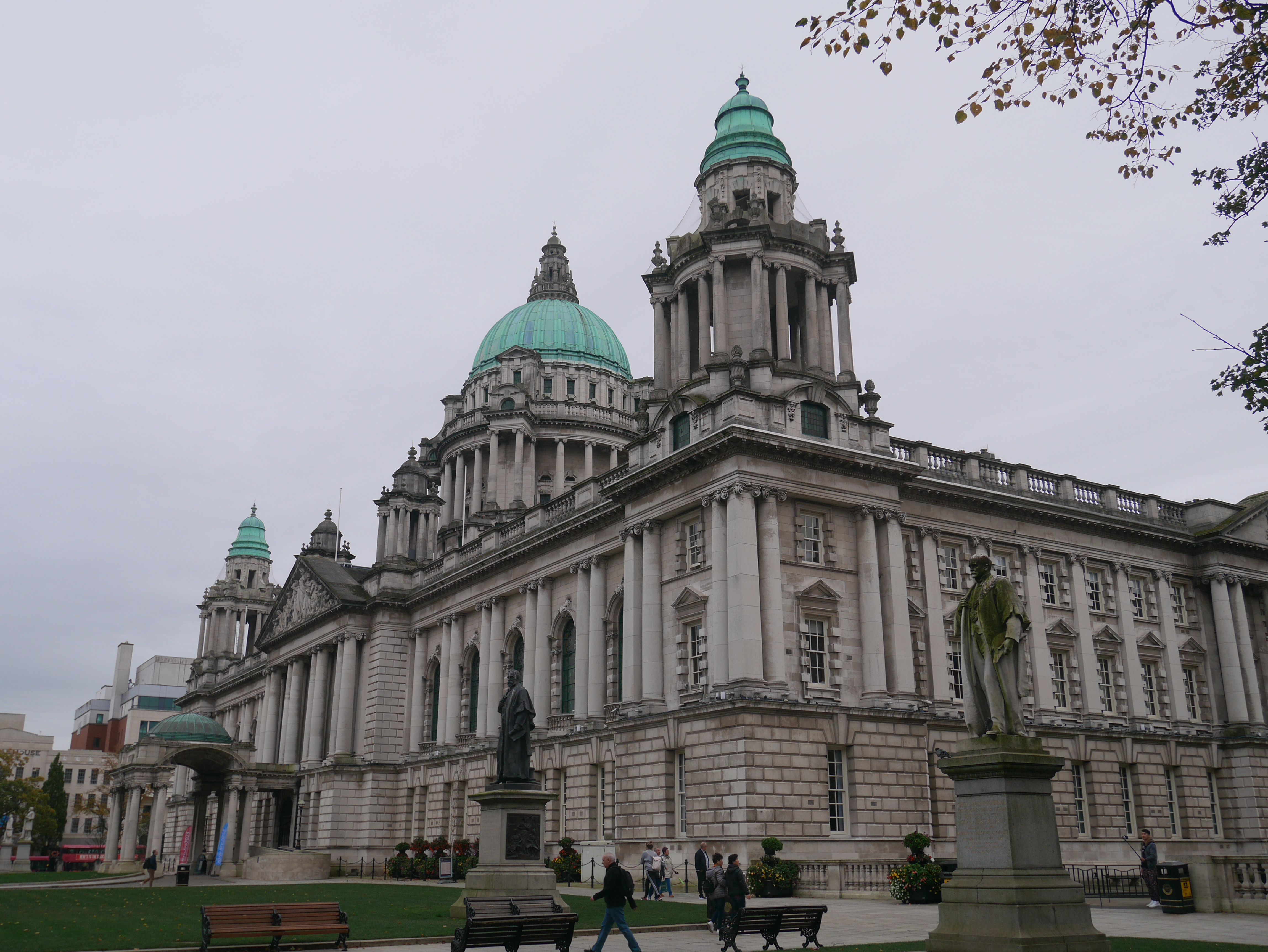 I knew that 72 hours wasn’t going to be enough time before I even arrived in Belfast. Then I got a stomach bug and when I arrived at my hostel, Arnie’s Backpackers, I died in my bed for the day. Ruining all my plans for the afternoon and shortening my time even more.

WHEN YOU JUST CAN’T GO ON

Whenever you get to a new destination or a new hostel you never know what you are getting yourself into. Considering I was feeling miserable I just wanted a quiet place to lie. Luckily Arnie’s was exactly that. Tucked away from the buzz of Belfast, on a side street, in a large Victorian home is Arnie’s. The rooms are a bit snug but it has a very homey feeling. I was in a four bed dorm and no one was around so I slept until dinner. I rose from the dead for food.

The hostel is about a 15 minute walk from the city center but it is located in the university area so the neighborhood is lively and there are tons of food options close by. I didn’t need to struggle too much to find a place to eat. I barely finished my food and crawled back into bed.

One of the major reasons Belfast was on my list was due to Giant’s Causeway. Created by ancient volcanic eruptions according to science or according to myths and legends a fight between Giant’s created the beautiful landscape.

I recently started watching “Game of Thrones” and wanted to check out the filming locations. I found Brit Movie Tours did a combo tour of Giants Causeway and the northern filming locations. I was ecstatic to be able to combine the two.  If I had more time I would have scheduled a southern locations tour as well and went to Winterfell but time would not permit. I have full intentions of going back and doing the other tour sometime in the future.

The tour was so exciting. The guide was incredibly knowledgeable of local history as well as loads of GoT info. She had even worked as an extra for awhile and had insider tips on the show. Not to mention the cast was in town for script rehearsals. There had been lots of sightings.

I went to the witches cave, Renlys camp ( the rope bridge), The Iron Islands and all things Theon, Bravos, and I got to walk down Kings Road. Definitely the highlight, I got some incredibly Instagram worthy shots. Check out the Northern location tour here.

My original intention was to hit a pub crawl that night and take in some of the nightlife that Belfast has to offer. My stomach was still wonky and I did not want to push it. I settled on grabbing dinner at Deane’s which had been recommended to me by a few people. It was also the first full meal I had in days. My stomach was up for literally nothing for the past 2 days.

I settled into a wonderful mushroom soup, a burger and a chocolate raspberry torte. Much better for my stomach then a night of drinking.

It is really important to me to get to know the history of wherever I am. Especially recent history. A few people recommended taking “A History of Terror” walking tour. It delves into what happened during “the troubles” in Northern Ireland. What are “the troubles”? It is a period of political turmoil(1968-1995) and acts of terrorism between the IRA and the British government. That is putting it lightly. 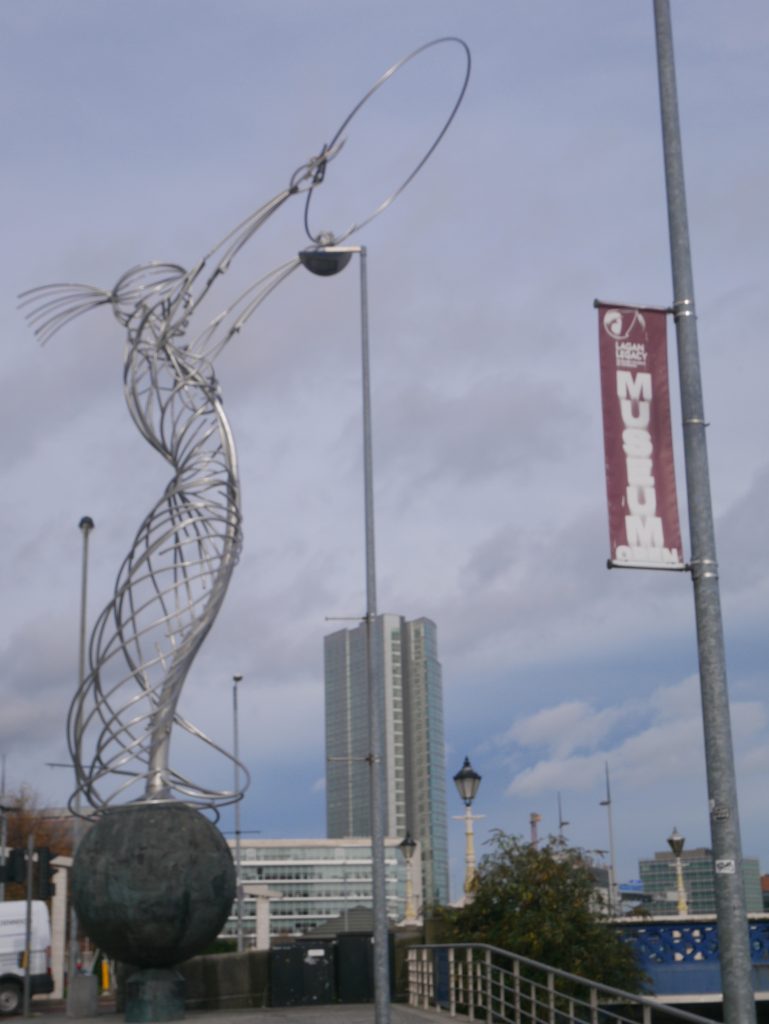 Walking the streets of Belfast it is hard to believe that only 20 years ago there were security gates up all over the city, armed men roaming the streets, and a strict curfew set in place. The streets that now had a giant shopping mall and quick service restaurants where destroyed by constant bombings. A lot of the city had been completely re done.

I knew very little about the IRA and what happened in Belfast and I still don’t know the full scope. Listening to my guide describe what it was like to live during that time. Learning that there are no memorials to the lives lost and no museums telling the story of what these people lived thru seems absurd.

Check out Dead Center tours here if you want to take a “History of Terror” tour.

After an emotional 2 1/2 hours I took a lunch break and then decided to go on the free walking tour.

This one focused on all history just briefly going over “the troubles”. You learn all the basic things one learns on a walking tour. How the city was founded, the launch of the titanic, more Game of Thrones stuff. Interesting random facts like: Did you know the first time Led Zeppelin played “Stair way to Heaven” live was at Ulster Hall in Belfast?

My guide was an older gentlemen who was a history teacher for many years, retired and now does walking tours to educate tourists about his lovely city. This company also offers paid political tours told from both sides of the spectrum. If you would like check them out here.

Belfast can be a little industrial, a little hard but it has a unique spirit and interesting history.

Sadly there were many important things I did not get to do while I was in Belfast. If you go you should probably leave yourself enough time to fit them in. I wish I could have stayed a week or at least 5 days but when I head back to Ireland ( possibly in the spring) it will be on my list to revisit.

I can’t wait to go back to Belfast. I want to do all the things I missed and experience as much of the city as I can.

I would like to thank Arnie from Arnie’s Backpackers and Brit Movie tours for being so hospitable and hosting me while I was in Belfast. They added to how wonderful the trip was. As always all opinions are my own!